Ever increasing traffic demands have resulted in the proliferation of Application Delivery Controllers (ADCs) and advanced server load balancers; this highlights the need for more efficient deployment options. A10's Application Delivery Partitions (ADPs) are a proven virtualization solution within its AX Series ADCs, fulﬁlling the key requirements of high density and high performance. The ADP virtualization technology provides separation and partitioning of multiple ADCs on a single AX Series platform, helping organizations to dramatically reduce total cost of ownership (TCO) without sacriﬁcing performance or ease of use.

Rack density, performance (no hypervisor layer) and the lowest cost per ADC instance are the strongest differentiating factors for A10's ADPs versus other multi-tenant architectures. Rack density is essential to virtualization return on investment; however, this can only be effiective if the newly deployed ADC system can deliver the same performance as the system it is targeted to replace. A single AX Series appliance can deliver over 100 partitions, expanding to over 1000 in an AX Virtual Chassis System (aVCS) cluster. As A10's ADPs do not use a hypervisor, native AX Series performance is divided according to the required number of partitions, without 3rd party software impact. Beneﬁts of A10's ADPs include: 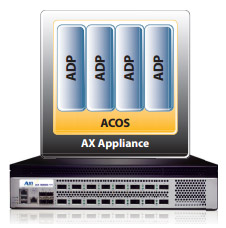 What Makes Up an ADP?

ADPs are made up of discrete computing elements designed to efficiently segment each ADC partition, isolated in secure partitions. Built upon A10's scalable Advanced Core Operating System (ACOS), each ADP has:

Of particular interest in ADPs is Layer 3 Virtualization (L3V). L3V allows organizations to use the same IP address ranges (for example, overlapping RFC 1918 ranges) to ensure the multi-tenant data center architecture has the same ﬂexibility as a separately deployed device.

In simple terms, this allows each ADP to have the same IP addresses deﬁned, if the administrator so chooses. 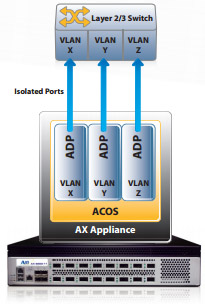 ADPs are applicable for any type of organization to drive operational efficiency, and potentially a lot more. Two customer use cases include: 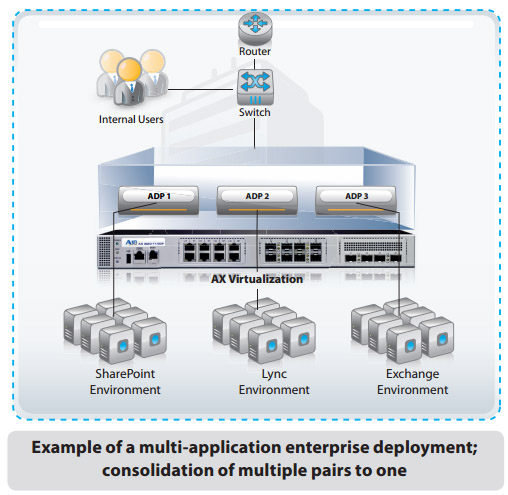 ADPs can be used by any size organization for public or private cloud enablement. In addition to ADPs, A10 offers additional ﬂexible ADC virtualization choices, including aVCS for scalability, SoftAX for ﬂexibility, aCloud for cloud solutions and AX-V for strong isolation.