Note: These numbers can rise significantly due to removal of memory restrictions; numbers vary by platform selection.

While 32-bit systems have been dominant for the past couple decades, computing evolution continues to impact networking devices. 64-bit processing is the latest significant leap, increasing addressable memory to achieve the industry's highest levels of scalability and performance.

The AX Series 64-bit ADCs provide a foundation for current and future application features that need more memory or higher scalability. The impact to users and network architects is considerable: Users are delivered applications faster and seamlessly, with network architects obtaining greater efficiencies, flexibility and extensibility when deploying and managing data center applications.

The most fundamental change is the removal of the 32-bit 4 GB memory limitation per core. This is critically important for a high performance ADC as features and scalability can be restrained by memory limitations in 32-bit platforms.

However, unlocking the power of 64-bit systems is not as simple as just adding a 64-bit processor. The Operating System must also be 64-bit capable, while coupled with the overall architectural design. 32-bit OSs on 64-bit capable hardware and 64-bit applications using a 32-bit kernel default to the lower common denominator of 32-bit processing. Only the genuine 64-bit AX Series with the industry's first 64-bit ACOS kernel will enable each processor thread and core to work with more than 4GB RAM.

64-bit support is now a deciding factor for any ADC deployment. As connections and corresponding demand on network devices increase, ADCs must be capable to address the required memory to support ever-increasing traffic volumes.

The additional memory within the 64-bit AX Series appliances delivers flexibility to enable additional benefits according to customer demands. Key advantages include: 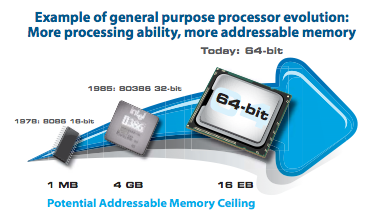 For historical perspective, the networking and security industry has been limited by 4GB RAM addressable memory. With the explosive growth of Internet traffic, processor and hardware vendors have released 64-bit capable system components to address increasing scalability demands. System vendors must provide a 64-bit kernel to overcome the bottleneck and take full advantage of 64-bit capable hardware. The AX Series platforms are the first to achieve true 64-bit Application Delivery.

With the AX Series, customers do not have to wait for the additional power of a 64-bit system. The AX Series was designed for 64-bit and no shortcuts or work arounds are in place to limit the performance. For example:

AX 5200: The industry's first genuine 64-bit ADC (platform and OS). The AX 5200 "supercomputer class" ADC employs a shared memory architecture allowing all memory to be addressed per core, delivering the most efficient memory usage on the market today.